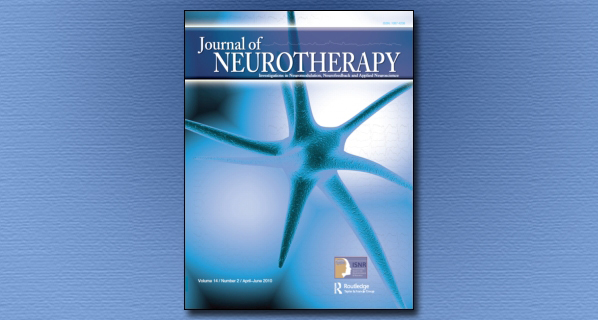 ABSTRACT:  Background: This paper presents a theoretical framework for using a combination of EEG biofeedback plus regular biofeedback with clients who have movement disorders. Method: A case study is included that describes intervention and results with a 47-year-old woman with the dual diagnosis of Parkinson’s disease and dystonia. The rational for adding biofeedback interventions to traditional medical treatment hinges on the fact that muscle spindles, which are involved in muscle movement and tone, have double innervations, cholinergic and sympathetic (Passatore, Grassi,& Filippi, 1985). Both of these systems can be operantly conditioned using biofeedback. There were two learning goals: (1) increase the production of 12 to 15 Hzactivity since this sensor motor rhythm (SMR) is associated with decreased firing of the red nucleus and the red nucleus, in turn, has links to the muscle spindles (Sterman, 2000); (2) train for calm, relaxed autonomicnervous system functioning (decreased sympathetic drive and parasympatheticascendance) because this may also have a beneficial effect on muscle tone by means of influencing muscle spindle activity (Banks, Jacobs, Gevirtz,& Hubbard, 1998). Training for balanced autonomic system functioning is facilitated by diaphragmatic breathing at a rate of about six breathsper  minute. Diaphragmatic breathing results in respiration and heart rate variability, presented as a line graph, following the same sinus oidal pattern when viewed on a biofeedback screen, a pattern termed respiratory sinus arrhythmia (RSA, Budzynski, 1989). This dual training of neurofeedback to enhance SMR activity and RSA biofeedback for relaxed autonomic nervous system (ANS) functioning was done for 30 sessions over a six-month period.

Results: Training was associated with significant reduction in dystonic movements. Additionally, the client became able to use diaphragmatic breathing to cue herself to turn on a mental state associated with increased SMR production and thus control incidents of freezing, a common problem in advanced Parkinson’s disease. With twelve more sessions over the next 18 months, the improved quality of life has been maintained. Discussion: This work is reported to put forth a theoretical model of why neurofeedback plus biofeedback is helpful in movement disorders and to encourage research in this area.